Semalam, when I was about to sleep, seperti biasa I log on to fb lah kan to read articles and what not like what we all usually do before we sleep sehinggakan tidur lambat sampai ke sahur.

And then I saw this video which was shared by my friend. Her friend shared this (macam share-ception) and she was quite mad.

I was like “eh kenapa sak” so I watched the video la. Usually, I don’t watch videos on Facebook cos it’s gruesome ah like entah-entah konek ke apa. But it’s Toggle. And also Double Trouble (a Toggle series which I follow cos Kumar).

Apparently the video is about this Fashion Influencer, Saffron Sharpe, just saying NO to everyone except herself. It’s a promo vid for the Toggle series, I suppose. I honestly find it rude and distasteful ah for Toggle to do that cos… Toggle???? Isn’t under MediaCorp and isn’t it under MDA or what… For those of you who missed the video, it has been deleted but jangan risau. Once something is uploaded on the internet, it remains there PERMANENTLY.

Let’s all say thank you to @sy4za

Dah puas tengok? Kurang ajar kan budak ni!! Apa sak. Some argue that maybe it’s not her intention to do that la cos it’s scripted. WELL SCRIPTED BY HER THAT IS. Even if it’s scripted by someone else, that someone else is biadap. Whatever it is, the script is bad la. It’s just “no”, “disaster”, “cringe”. Probably what a 15 yo girl would tweet after school.

After like hundreds of comments, Toggle decided to finally issue an apology and take the video down. (Took them >24hrs to realise that they shouldn’t upload the vid lol)

Hmm… To critique celebrity fashion is one thing, to critique orang yang setakat nak berjalan kat Orchard Road… Apa hal sak? I wonder what “upcoming programme” they are talking about. Also, while watching this video, I was quite confused ah. Cos there was this webisode where Kumar and Mark Lee discussed about judging others and in conclusion, they said it’s not nice to judge others yadayada you know the drill. But then… Toggle released this video on fb. So macam cuntflicting.

Link to the webisode: http://video.toggle.sg/en/series/double-trouble/ep20/400645

So now what. Toggle is a hypocrite? URGH stres sak!!!

Whatever it is, let me do a scene by scene review of the Fashion Police video macam dalam entri-entri saya sebelum ini ya. (sorry for the low quality photos cos my source is from Twitter, not the original vid)

No to slippers w trousers. I agree. But you tell that to the abang-abang baru balik dari Solat Jumaat. If this one you cringe, on Friday when you wait outside the mosque I think you terus cardiac arrest.

Minions cry because you can’t even get their colour right despite being so popz.

“Floating cap? I don’t think that was ever in trend like seriously” Since when has Mean Girls become irrelevant? Never. So… there’s no limit to her fashion because…

Maybe she has a brain tumour? Or some disfiguration going on. Ataupun… She keeps her wallet in her hair cos I think that’d be a smart move! Which burglar would climb up her head to snatch that wallet? NOBODY. Saffron is just jealous that this lady has the body to flaunt her Lingerie Style Fashion in Orchard Road.

“Army Wannabe”. Maybe this guy is an army regular. And he loves his job so much? She didn’t realise she’s also an army wannabe also is it? I mean she has SAF in her name. SAFfron. Hunty.

To finish this video off, she described herself in 3 words.

Is this product placement???? What is lux sak.

She just wore a jacket in sunny Singapore and she calls herself minimalistic?

Actually macam weird yang dia described herself in these 3 words. I think she meant her fashion ah. Unless she is her own fashion then fine.

Frankly speaking, if you don’t like how someone is dressed, go up to them and give tips la. Since you’re an INFLUENCER, why didn’t you use your influence to change their mind? Why talk behind them? The only way Fashion Police should be done is like this.

Another reason why I actually bother to write this blog entry is because I want to bring up Toggle’s rudeness la. Selama ini I’ve been so pissed @ Toggle cos it’s obvious there is almost no minority representation on Toggle!!! Not only Toggle but Mediacorp Ch5!! Some of you might call me a sour pussy or whatever but you’re the type who share/like BuzzFeed videos when they talk about Black/Asian/Latino/Minority representation in Hollywood. It’s the same.

Stop using the phrase “local celebrities” if you meant “local Chinese celebrities”. Like you have a weekly best dressed update but all also Cina???? Malay/Indian celebrities not worth your time is it? And then there’s “Top 10 Celebrity Moms/Dads/Baby/Couple etc”

Some may argue that this is all demand/supply forces and since Chinese is the majority so all Chinese ah. Err… Ok so explain to me the Chinese ad I saw before my Malay drama. ??? Macam lah aku faham. Macam lah aku tertarik dengan iklan itu. Macam lah aku nak beli.

Talking about ads, Ikea has this hari raya ad (which I blogged about previously) and it is actually shown before YouTube ads and people are annoyed that they can’t skip the ad. Well, it is only before your YouTube videos. I have Chinese ads before my very eyes my entire life. Fikirkanlah.

Not only that. Why is it that Suria and Vasantham always at the bottom of everything (let’s not include CNA cos since when is news relevant)? Like I have to scroll down just to reach the Suria section on Toggle website. Not only TV channels ah but radio stations too. You may say it’s just random arrangements. Ok fine, one day I want Vasantham to be on top and Channel 8 below. Or some may say that “oh cos many ppl wanna see ch8 what so put ch8 first la”. Well, if people really want to see the contents of channel 8, they too would scroll down to find the contents. 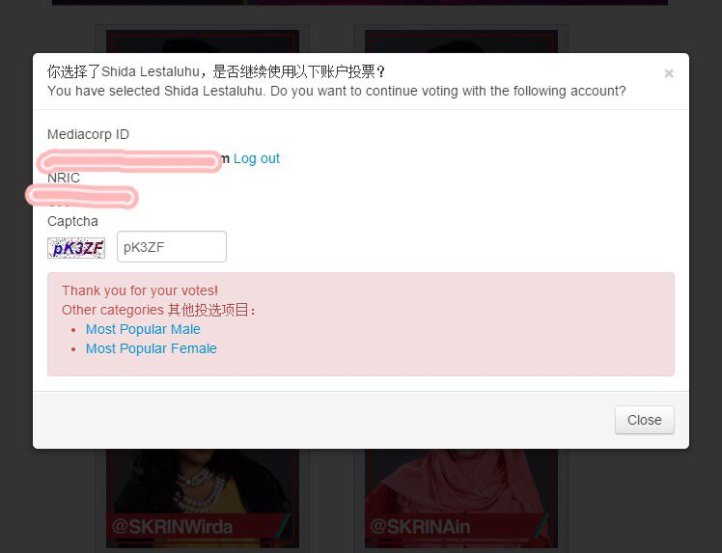 Translation in Chinese for a Malay competition… Ok?

But of course there isn’t any racism in SG. Only when a riot occurs, then got racism, kan?

Back to Saffron, I could have tutup sebelah mata to that video if the video was uploaded by her and not Toggle ah. Cos so many YouTubers wannabe yang nak viewership, so diorang buat kerja bodoh supaya “viral” ah.

I honestly love the show, nasib dah habis sak. I watched it cos Kumar. And to my surprise, webisodes are less censored than free-to-air channel. Kumar openly talks about his sex life/drag all. So, syabas Mediacorp! And ya, if you want gender (LGBTQ+) representation in mainstream media but there isn’t even equal racial representation? Hmm…

Before all these I thought Saffron was really cute and I actually stalked her the other day (like a long time ago). Now, when I want to stalk her instagram… Hais HARAM SAK! Aku dah la puasa. Sigh. Why is she a Fashion Influencer? Dia pakai cuma sports bra and coli-coli sahaja.

How do I even pronounce influencer?

wen as in ren as in person in Chinese.

(If anybody is offended by reading this then welcome to my life, Salam Lailatul Qadar)